The LHC is the most powerful particle accelerator operating today. Colliding protons with a center-of-mass energy of 13 TeV, it is sensitive to physics at the shortest distance scales that we can currently access experimentally. It has the potential to provide answers to some of the open questions of particle physics or reveal new surprises. The random nature of the collision processes and the complexity of the final states (which typically include hundreds of particles) necessitate a significant data analysis effort to extract the underlying information. The most straightforward analysis methods are already well-established and have produced a variety of important results, including the discovery of the Higgs boson. To extract further information, one needs to dig deeper in the data. One of the most natural tools for dealing with complex structures in large amounts of data is machine learning and we have been pursuing several projects in this direction.

In one recent project we proposed several machine learning strategies to search for new physics signals in wavelet transforms of kinematic distributions.

Another work in progress involves the application of machine learning techniques to identify, in a largely model-independent fashion, anomalous jets whose origin might not be a quark or gluon but physics beyond the Standard Model.

Interpreting the thermodynamic properties of quantum black holes and cosmological space-times with horizons and uncovering their underlying quantum statistical mechanics remains a challenge in spite of the intense efforts over the last 40 years. What does the black hole entropy measure, the degeneracy of microstates, entanglement entropy between the inside and outside of the horizon, or some intrinsic gravitational entropy? Is the quantum mechanics of space-times with causal boundaries unitary? If so, why do some of them look thermal and non-unitary in some approximation?

We have recently proposed that black holes and the universe have to be described by quantum stateswithin string theory  and that the extreme approximation of treating spacetime as strictly classical geometric object is at the origin of many of the above mentioned issues. The idea was applied to study quantum black holes and we showed in a series of recent articles that indeed, when the the quantum nature of the black hole is taken into account the evolution is consistent with unitarity and other quantum mechanical constraints. More recently, we applied this idea to black hole mergers and  proposed that gravitational waves detectors should see specific signatures of the quantum nature of black holes.

Fluid-Gravity correspondence and its application to Quark Gluon Plasma

One of the most intriguing and fundamental questions is a formation of Quark Ggluon Plasma (QGP). Experimentally, QGP is created in the heavy ion collisions. A quest for QGP is the driving force behind two major experimental programs, one at the Relativistic Heavy Ion Collider (RHIC) and another one at the LHC.

Among most striking recent discoveries is the observation made at the RHIC that QGP produced there at temperatures about twice the QCD critical temperature is in fact strongly coupled. The  RHIC data  indicate that QGP at not too high temperatures behaves like a nearly perfect fluid with relativistic hydrodynamics being an appropriate description of the observed phenomena. Remarkably, gauge theories at strong coupling can be studied using the AdS/CFT duality: from the string theory point of view, QGP is holographically dual to weakly coupled string theory in the 5-dimensional  Anti-de-Sitter (AdS) Black Hole background metric.  Many interesting phenomena relevant for heavy ion collisions can be learn from the (super) gravity approximation to the string theory. In particular by studying graviton`s absorption into the AdS Black Hole within Einstein`s general relativity, one can learn a great deal about dissipative processes taking place in QGP.

We have entered the fascinating era of the Large Hadron Collider: the initial proton and heavy
ion collisions are already underway. Heavy ion collisions provide the unique possibility of
creating and studying a new state of matter, known as quark gluon plasma, at energy densities
and temperatures similar to those of the early Universe at \(10^{-5}\) seconds after the Big Bang.
The microscopic theory describing the structure of protons and nuclei is the theory of strong
interactions, know as Quantum ChromoDynamics (QCD). Even though the fundamental theory
is known, it is extremely dicult to deduce from the QCD results of collision processes. This is
due to the high level of complexity of the theory involving mutual interactions between gluons,
the "photons" of strong interactions. When probed at very high energies, heavy nuclei, and
even protons, appear as very dense clouds of gluons. The main objective of this proposal is to
develop the theory of high energy collisions of dense gluonic objects, using rst principle QCD
calculation and apply it to experimental data on heavy ion collisions at the LHC.

Methods to measure quark polarizations at the LHC

For the strange quark, the heavy-quark approximation cannot be used. However, it is known from experiments at LEP that Λ baryons in fact preserve much of the strange-quark polarization. We argued that this allows measuring the polarization of strange quarks at the LHC. Furthermore, there are reasons to believe that up and down quarks hadronizing into a Λ may also be transferring some of their polarization. This may open the way for measuring their polarization as well. We motivated studies in top-quark samples in ATLAS and CMS that would provide additional information about the polarization transfer from the strange, up and down quarks to the Λ.

Several additional interesting projects on these topics are underway or planned for the near future.

The most powerful particle physics experiment ever built, the Large Hadron Collider (LHC) at CERN, holds great promise. In 2012, it discovered the Higgs boson, and the significantly higher energy and collision rate that it provides today may allow discovering new types of particles, some of which could explain the various open questions in fundamental physics (the origin of the electroweak scale, dark matter, the matter-antimatter asymmetry in the Universe, and others).

While waiting for discoveries, the results of measurements and new-physics searches from the LHC can be re-used for examining the viability of new physics scenarios other than those for which they were originally designed. Determining the status of those scenarios involves simulating the relevant physical process, the resulting signatures in the detectors, and the analysis done in the experimental studies. As a welcome by-product, we identify general gaps in the experimental coverage of potential new physics signatures.

Apart from providing feedback to the experimental community, this type of studies make us prepared to interpret any hints of new particles that the LHC might report in the future. One hint, near the mass of 750 GeV, was reported at the end of 2015. The hint has disappeared since then, by it made us think about various theoretical ideas that may still turn out useful in other contexts.

In particle physics, spontaneous breaking of scale invariance (SSB of SI) is applied to mechanisms for confinement of quarks and gluons, while in gravity and cosmology it relates to the acceleration of the present universe, quintessence scenarios and inflation of early universe. In gravity and cosmology, SSB of SI is nicely implemented in the context of the Two Measures Theory, which I have developed with Alex Kaganovich. This model addresses all the cosmological questions mentioned before and also provides an interesting solution to the 5th force problem that most quintessence scenarios suffer. I have also been studying the possibility of creating a universe in the laboratory starting from a bubble of false vacuum (see figure). 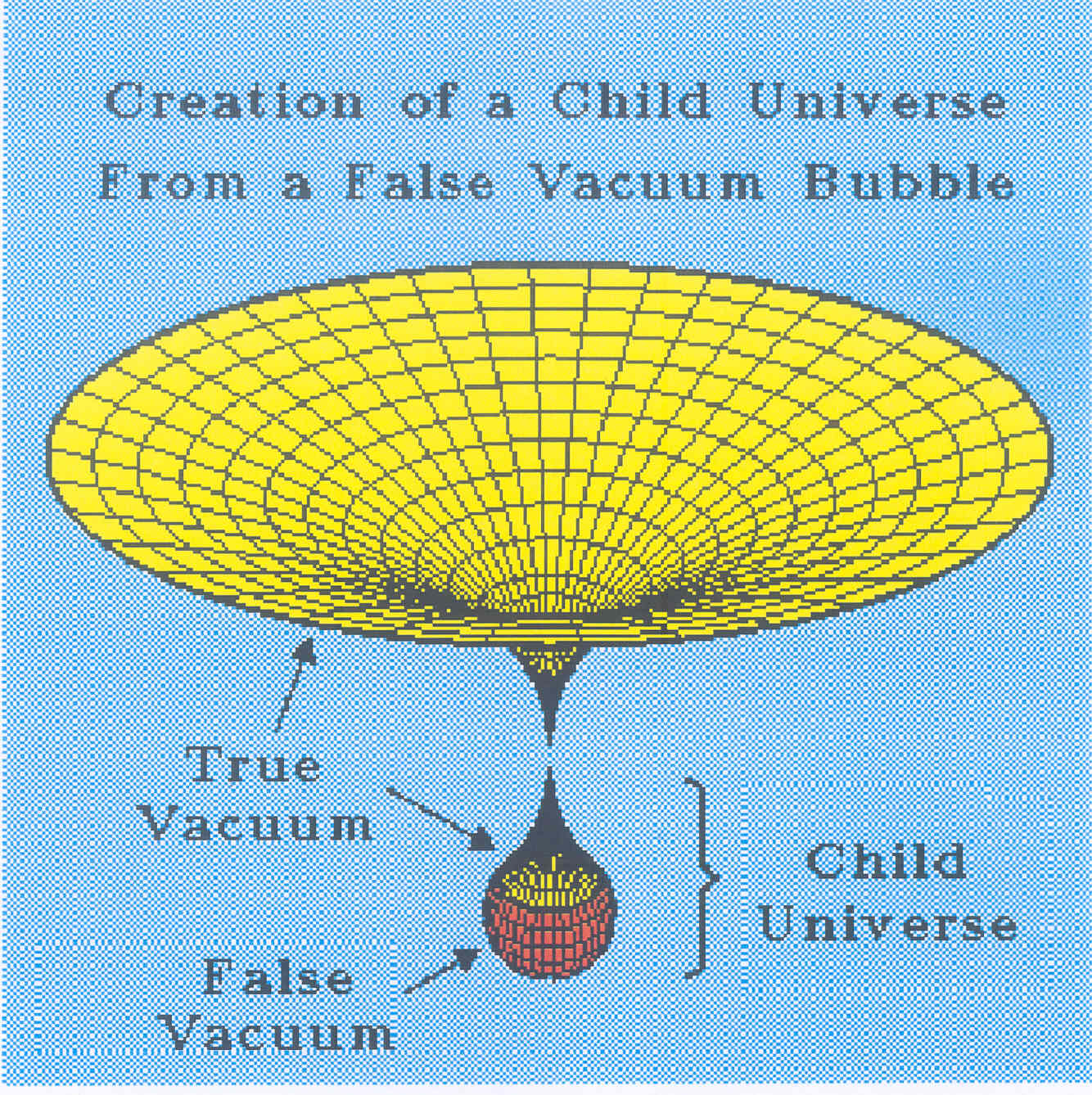