We study the optical properties of vertically stacked GaN/AlN self-assembled quantum dots (SAQDs) grown on Si substrates. We use temporally and spatially resolved cathodoluminescence (CL). CL is generated by the injection of a tunable and position-controllable high-energy electron beam from a scanning electron microscope (SEM) into a semiconductor sample. The electron beam generates a large density of electron-hole pairs, many of which recombine radiatively across the bandgap of the semiconductor, thereby generating the luminescence which is subsequently detected and analyzed. Potential applications of these quantum dots include light source for UV-blue-green LEDs, lasers, optical information storage, single photon emitters and sources of entangled photons (quantum information technology).

While the presence of thermal stress-induced micro-cracks is clearly undesirable when attempting to obtain high-quality thin film growth of III-Nitride films and SAQDs on Si substrates, the presence of micro-cracking however enables a study of interesting stress-induced energy shifts and lifetime changes in the QD optical transitions that can be measured with a high-resolution spatially resolved probe, such as with CL. Normally, it is difficult to locally perturb the strain tensor of QDs in a reliable and reproducible way with an external stress. We have found such a way using the micro-cracks as stressors in our research. Three-dimensional 6*6 \vec k \cdot \vec p calculations of the QD electron and hole wave functions and eigenstates were performed to examine the influence of biaxial and uniaxial stresses on the optical properties in varying proximity to the micro-cracks.

Superconducting quantum phase coherence gives rise to a variety of macroscopic quantum phenomena, among them to the Josephson effects. Due to extremely short coherence length, voltages appearing across high-TC superconducting microbridges are not related to Josephson effects but to the motion of current-created vortices. Josephson-like effects may however appear in relatively large high-TC bridges due to the coherence in current driven vortex flow. To enforce the coherent regime we employ laser written channels of easy vortex motion in c-axis oriented YBCO thin films, and heavy ion irradiated channels in BSCCO single crystals. The project is supported by the Israeli Science Foundation grant.

We are studying hydrogen absorption and corrosion on a metal surface. The system studied was Gd on W(110). This system was exposed to several Langmuirs of hydrogen. In the image below we see a series of consecutive images taken above the same place. The time between two images is about ½ hour. The phenomenon which is clearly distinguishable is the periodic appearance and disappearance of several islands. Since the islands appear and disappear exactly in the same shape, it clear that the island is not vanishing but somehow becomes transparent to the STM imaging process. As seen below, in some cases, the STM tip is imaging the surface under the island.

The periodicity of the process is due to a competition between the stress induced by the hydride nuclei seen in the island as white protrusions and the stress in the insulating layer between the tungsten substrate and the gadolinium island. 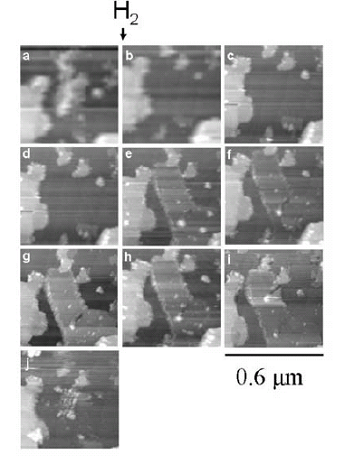 Noise spectroscopy of a single spin

We have found that tunneling with a STM (scanning tunneling microscope) to a surface in the neighborhood of a single paramagnetic atom or molecule (individual magnetic dipole) in the presence of an external magnetic field results in an elevated noise at the Larmor frequency. This high frequency noise results is due to the precession of a single magnetic dipole around the field (see Figure1).

Steps to improve the system which are implemented in these days, such as cooling to low temperature, working in time domain and scanning the field rather than the frequency are expected to improve the sensitivity of the detection system, to enable getting more information on the single spin physics.