The primary observational fact that emerged from studies of a large class of astrophysical sources is the occurrence of highly collimated outflows. On a galactic scale, jets are found emerging from radio galaxies and quasars powered by the release of gravitational energy near the supermassive black hole at the galaxy's center. The observed velocities in these jets reach 0.999 of the speed of light. Similar jets, though on a much smaller scale, can develop around the accretion disks of neutron stars and stellar black holes; these systems are often called microquasars. The relativistic jets are also invoked to explain the powerful cosmic gamma-ray
bursts even though they could not be resolved by our telescopes. All cosmic jet sources may be connected by a common basic mechanism. A promising model is magnetohydrodynamic acceleration by rotating, twisted magnetic fields. The basic idea is that a strong magnetic field threading the rotating central object (black
hole and the surrounding accretion disk) serves to convert the rotational energy to the outward directed Poynting flux. We study the basic properties of such electromagnetic jets paying special attention to physical mechanisms responsible for the transformation of the electromagnetic energy into the plasma and radiation energy.

Enigmatic, rapidly pulsating radio sources, called pulsars, were discovered more than 40 years ago. They produce beams of radio waves which sweep around the sky like a lighthouse, often hundreds of times a second. Some of them generate also intense beams of gamma-rays. It was found that the beams are radiated out from rapidly rotating, extremely dense neutron stars; a typical pulsar is only around 10 km in diameter (with the mass as large as the solar mass!) and has a magnetic field trillions of times stronger than Earth’s. Such extreme physical conditions are well beyond those attainable in terrestrial laboratories and it is no wonder that, in spite of the great amount of effort that has been expended to understand physics of pulsars, the mechanisms that generate their intense radiation beams remain largely a mystery. We develop theoretical models of the electromagnetic emission from the relativistic plasma within the pulsar magnetosphere. Confronting the calculated emission pattern with observations would tell us a great deal about the fundamental physics behind pulsars.

Black holes play a double role in physics, both as astronomical objects routinely discovered nowadays in binaries and in the centers of galaxies, and as central targets on the path to understanding quantum gravity. The presence of super-massive black holes in the centers of essentially all galaxies is strikingly illustrated by the observed trajectories of stars in the very center of our Milky Way Galaxy (see Movie 1). Among the many observational implications of such massive black holes, they are thought to induce characteristic steady-state, mass-segregated stellar cusps in the centers of galaxies, as illustrated in Figure 1. Among the tests of strong gravity and clues to quantum gravity obtained from the study of black holes, the quasinormal ringing of perturbed black holes induces characteristic gravitational waves and may shed light on the quantum description of black holes (see Figure 2).

Movie 1: Observed stellar trajectories around Sagittarius A* (see tour), the massive black hole in the center of our Galaxy. Although the central object inferred from these trajectories is ~4 million times more massive than our sun, its radius must be less than the pericenter of the nearest star shown (denoted S2), 17 light hours. 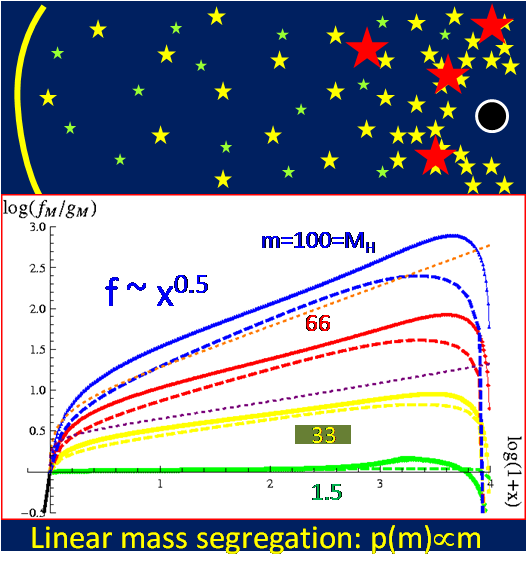 Figure 1: Bahcall & Wolf (1976,1977) have shown that within the radius of influence of a massive black hole,stars of different masses segregate, each species forming a power-law density cusp. The first image illustrates mass segregation of stars (light stars in green, intermediate mass-yellow, and massive-red) around a massive black hole (black disk). We derived an analytic solution for the energy distribution \(f(x,m)\) of stars with an arbitrary mass function \(g(m)\). At intermediate distances \(f\sim x^p\), where \(p(m)=m/4M\) and \(M\) is an averaged stellar mass (see details). The figure shows the landscape of the energy power-law indices pH of the most massive stars, for different power-law mass functions \(g(m_{L} < m < m_{H}) \sim m_\alpha\), as a function of power-law index \(\alpha\) and the mass range \(\zeta=m_H/m_L\) . 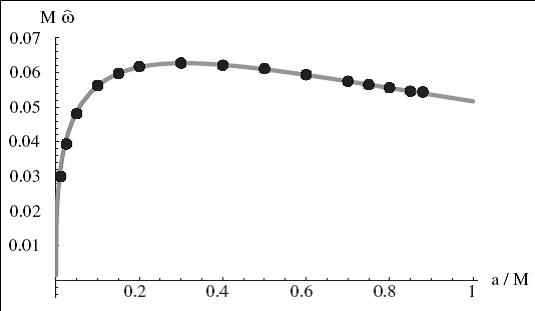 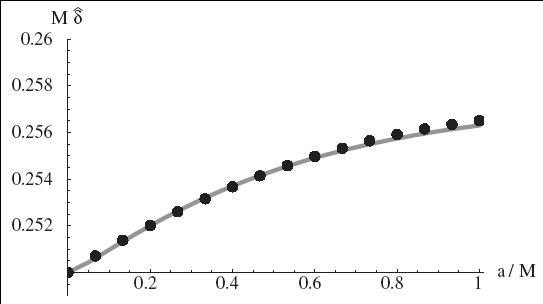 Figure 2: The intermediate and asymptotic quasinormal spectrum and greybody factors of a generic (Kerr-Newman, i.e. rotating and charged) black hole in flat space were analytically derived 1, 2 ,3. They reveal a peculiar structure, reminiscent of special black holes where a dual quantum description has been established.|

Galaxy clusters, as the largest virialized objects in the present day Universe, provide an important link between cosmology and astrophysics. These relatively young (redshift up to a few), massive (up to a few 1015 solar masses, i.e. ~1045 kg) objects appear optically as concentrations of hundreds or thousands of galaxies, typically found at the nodes of the filamentary cosmic web (see Figure 1). Gravitational lensing maps suggest that the mass is predominately dark (see Figure 2 in blue). X-rays reveal that most of the baryonic mass is in the form of diffuse, hot (10-100 million K) plasma, called the intracluster medium (ICM), extending a few Megaparces (~1023 m) out from the center (see Figure 2 in red). Radio images reveal the presence of relativistic particles (AKA cosmic-rays) and magnetic fields that permeate the ICM.
We address central open questions in the study of galaxy clusters, such as: what stabilizes the dense cluster cores from catastrophic cooling and collapse? what is the nature of the subtle features recently found in the centers of clusters, including spiral features, cold fronts, and X-ray cavities/radio bubbles (see Figure 3)? how do the cosmic-rays and magnetic fields form, evolve, and decay? can we identify the virial shocks that are thought to surround clusters?

Shocks form in a supersonic flow which encounters an obstacle and has to suddenly decelerate to subsonically flow around the body. Alternatively, a gas expanding supersonically into ambient medium produces a shock moving ahead of the gas. Such shocks are very ubuquitous in space where they propagate in collisionless plasmas and generate high energy particles. The latter are responsible for the emission coming from such objects as supernovae remnants (Fig. 1) and gamma-ray bursts (Fig. 2) and their afterglows (Fig. 3). Collisionless shocks are wonderful natural laboratories which allow to learn fundamental processes such as particle dynamics in electromagnetic fields (which may be very peculiar and unexpected), acceleration to relativistic energies in natural accelerators, nonlinear interactions in plasmas and nonlinear structure formation. We study the internal structure of collisionless shocks (1, 2) and the processes of the charged particle energization (3, 4, 5).

The Sun governs the life of the Earth. Solar-terrestrial relations occur not only via radiation coming to the Earth but also via time-varying plasma flow (Fig. 1). This solar wind is decelerated and diverted by the bow shock forming at the distance of about 10 Earth radii toward the Sun. The diverted plasma flows around the Earth, shaping a magnetosphere (Fig.2) with a long tail and a current sheet where the so called "magnetic reconnection" (Mov. 1) occurs, causing magnetic substorms (Mov. 2). We study the basic processes in this interaction: mirror waves generated behind the shock because ions are heated more in a direction perpendicular to the magnetic field (1, 2), nonlinear waves propagate in plasma and steepen similar to "shallow water waves" (3), bow shocks are formed around the planets with or without global magnetic field and energize ions and electrons (4, 5, 6), magnetic field lines locally reconnect in the current sheet in an avalanching way (7, 8).

Collisionless Shock Waves and the Origin of Cosmic Rays

Astronomy in the radio, X-ray, and gamma ray and ultrahigh energy gamma ray frequency bands is made possible largely by relativistic particles, which emit at these frequencies when their paths are bent by magnietic fields. The Crab Nebula is but one famous example of synchrotron radio, X-rays and gamma rays being emitted by electrons moving at 0.999999 of the speed of light. We attempt to understand how, and under what circumstances, violent explosions accelerate a small minority of particles to such enormous energies. 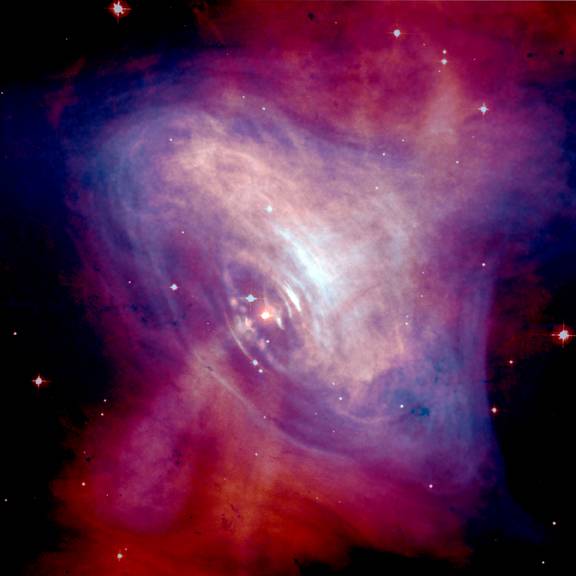 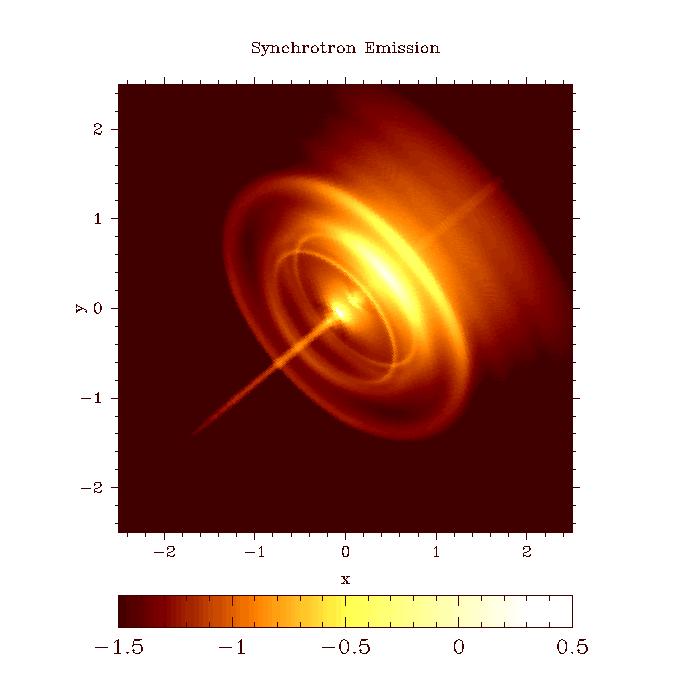 Manifestations of Exotic and New Physics in Nature

We examine astrophysical consequences of extreme, exotic, and new physics.

In Gamma Ray Bursts, for example, general relativistic effects , especially the event horizon of the black hole, may play a crucial role. We examine whether observations can reveal these effects and the existence of the event horizon. Preliminary results suggest that general relativity may be crucial to understanding the qualitative nature of gamma ray bursts.

In magnetars, collapsed stars with extraordinarily high magnetic fields, the strength of the magnetic alters the nature of quantum electrodynamics (The magnetic field-particle spin interaction term in the Langrangian exceeds the elecron rest mass). The vacuum develops an index of refraction that affects the propagation of light. Condensed matter, e.g. the crust of the magnetar, is strongly affected by such a magnetic field. We attempt to understand the effects of the ultrastrong magnetic fields on the observed phenomena.

In cosmology, we attempt to understand dark energy, which is matter with negative pressure, as a field that is generated by dark matter. This hypothesis aims to resolve the present mystery as to why dark matter and dark energy both presently exist in the universe in comparable quantities.